The claim that greenhouse gases warm up the Earth by 33°C refers a joint statement by national academies of Brazil, Canada, China, France, Germany, India, Italy, Japan, Russia, UK and USA in 2005: “the existence of greenhouse gases in the atmosphere is vital to life on Earth – in their absence average temperatures would be about 30 centigrade degrees lower than they are today.”  This claim has been widely endorsed since by numerous academic institutions including the IPCC around the world.

Detailed analysis is summarized in a ppt presentation, which can be downloaded from this Acribd link:
https://www.scribd.com/document/358487453/CaoJ-CC2-2014

Firstly, the figure has obviously misplaced major tick numbers of “10” and “5” for the abscissa; supposedly this is a simple typo.

The graphs in FAQ2.2 Figure 1 were digitised, and area size under the graphs was integrated.  The area size is found to be an illogical number approximately 0.5 instead of 1.0.  An example with the graph for 1951-1980 daily minimum temperature is shown in the figure below.  This fact shows that there must be something incorrect in data handling and/or production of the graphs. 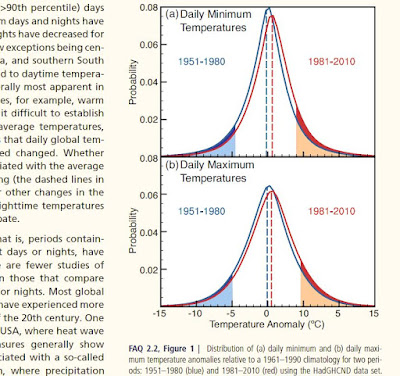 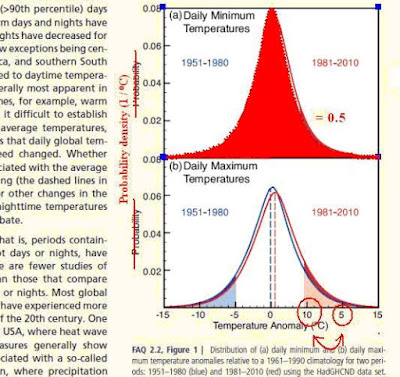 Hot and cold or not?
Dahl* says golly gush it's cold;
a mum's mate feels hot.

A scientist loves
inconvenient facts and thoughts,
which paves ways to truth.
Posted by J. Cao at 10:40 PM No comments:

With highest wisdoms,
mental products are science,
for the universe.
Posted by J. Cao at 11:44 PM No comments:

It’s two for the wing --
Induction and deduction
are two wings for reasoning.